No "Pitch Black" Heart: Seeing the Sacred in "Calvary" 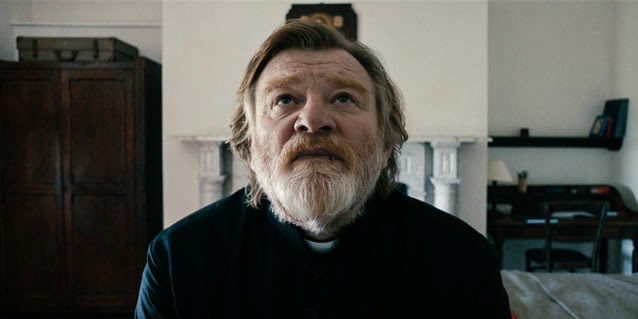 I know that many people sat in shocked silence in theaters across the world last year as Calvary—a film that uses the priest abuse scandal as its plot-driving device—faded to black. I was not one of them. I was sobbing and sobbing between puffs of, "Thank you, God! Thank you, God!" Perhaps it was the benefit of first seeing the movie in the privacy of my own home with no audience but my husband beside me. No need to feel self-conscious, no crowd-reaction carrying me along with it, no wondering what the guy behind me who munched on popcorn through gut-wrenching scene after gut-wrenching scene might be thinking now. But really, I believe it was that I had just witnessed the most beautiful, perfect ending to any movie ever made.

When I returned the DVD to Redbox, a notification popped up on my phone: "Did you enjoy the movie? Rate it now!" I clicked, scrolled, and beheld with horror the comments left by other viewers, such as, "I thought this was going to be funny, but instead it was sick and twisted and gross. I wish someone had warned me." *one star* I sat with my mouth hanging open as I clicked *five stars* hoping to tip the scale of humanity away from the gaping mouth of despair.

Dear disgruntled viewer: Yes, Calvary has been billed as a comedy but that is terribly misleading. (It is hilarious several times but should never appear in a Netflix lineup adjacent to Tommy Boy.) Yes, some of the content was sick and twisted and gross, but that was not the point of the movie. That was the villain. That was what the hero, Fr. James, was fighting against. And though I guess you missed it, the priest won. The sick and twisted and gross were restored to their proper place: beneath the heel of the Holy.

I intend for this post to be read by people who have already seen the film. Just stop now if you haven't and come back later once you have. If you need a refresher on the plot and the characters, plus some excellent commentary, here is Fr. Barron for you. He gives a beautiful exposition of Fr. James as a Good Shepherd. I intend to fill in one gap left by him, and to challenge the leading tag line that was used for promotional purposes:


"AN INVENTIVE WHODUNIT WITH A PITCH BLACK HEART."

Clearly, this is the darling favorite quote of someone very close to the film since it even appears here, on the official website. I'll grant that it is an inventive whodunit, though that made-up word seems far too flippant to stand so close to Fr. James's fluttering cassock. Maybe it's supposed to be really meta—representing the oft flippant parishoners. But there's really no excuse for the second half, for this film's heart is anything but black. Rather, it is bruised, pierced, enthorned, bleeding, and burning. It is the Sacred Heart of Christ.

Happily, the actor who plays Fr. James, the unparalleled Brendan Gleeson, noticed this:


The Sacred Heart actually appears in the film, also. But apparently, given his, "Aw yeah, cool," in that interview, the director did not intend what I'm about to describe. But as the second half of that clip explains, that doesn't matter. It's art that good—this blog's most cherished theme.

Fiona, Fr. James's daughter, notices that he has no photographs in his bedroom. But he does have two images on opposite walls from one another: a crucifix with a prie dieu beneath it and a painting of the Sacred Heart. These are the two depictions of Christ that he wakes to, prays with, and sees before sleeping. And they are the two main themes of the film. The crucifix is more obvious, given that the title of the movie comes from the hill on which the Crucifixion took place. It also typifies the penultimate scene, the hero's willing self-sacrifice and the murder of a man in persona Christi. The Sacred Heart is more subtle. It is signaled briefly that fateful Sunday morning as Fr. James kneels at his prie dieu, making his peace with God. The camera is pointed at the opposite wall, and we see the painting. The priest's head moves up, eclipsing the image—becoming the image. He will carry it with him to his death. 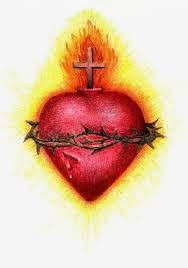 The scene on the beach is gruesome, gory, excruciating in the way that the Crucifixion is. But the movie does not end there. I think many people were so shocked by the gunshot that they were catatonic for the next few minutes. But those few minutes are everything. First, a panning montage of all of the characters: some signal a hint of positive change, others do not. There are glimmers of hope, but not enough to revive you from the beach scene. But then, the camera slides into the prison and we find Fiona—somber, silent, waiting. She is there to talk to her father's killer. At this point, your soul should be climbing the rungs of a ladder out of Hell, one step per beat of this moment. Why is she there? How is she there? This fragile creature who had not long ago attempted suicide is now performing one of the most heroic of all human tasks: forgiveness. She learned it from her father, implicitly and explicitly. He lit that torch in her heart, and she now carries it with her, burning, pierced, bleeding, open.

Fr. Barron claims that Fiona is smiling at him. She isn't quite. Her face is far more complicated and even more imploring than that. Her dripping eyes shine with the light of God. Her closed lips pin her to her chair, steadying her like a rock, waiting for an answer to her kind and gentle invitation. Fr. Barron leaves his comments there as if that is the ending. But I submit that it is rather the climax of the drama, superseding even the beach scene. For Jack, pulling that trigger was easy compared to lifting that phone to his ear. Will he do it? Will he open himself to that light and answer her tortured heart with his own? Will the horrors that he has endured be defeated, and the horrors that he has committed be redeemed? Fiona's forgiveness is beautiful and crucial; but the acceptance of forgiveness—that is what saves. Jack could back away, crying, sputtering, turning his gaze from hers just as he did with her father before her. He could stumble back into the pit, perhaps never to leave it again. But he does not. He locks eyes with her and we watch as she reels him in with her love. A literal call to conversion has been answered. Despite all likelihood—all manner of temptation, Jack has not despaired. After Calvary comes the Empty Tomb. This moment is like the shot of light shining through Christ's glorified wound at the end of The Passion. The music is perfect. The acting is perfect. The editing is perfect—a dénouement for all time.

The film is hard to watch. It is gritty and grinds against a multitude of sensitivities. But it is so very real. This is what happens in the wake of a scandal so devastating as the priest abuses. These are the seven deadly sins run amok in the field with the shepherd chasing after them. Yet it is also—firmly and clearly—the lost sheep, found. Through its ending, this film has revealed itself to be a perfect story, because it is a complete story—a eucatastrophic one. Fr. James says, "My time will never be gone." Here is an opportunity to believe in those words.

As I've watched people leave the Church citing the abuse scandal as their leading reason, I've often thought, "There must be a movie. A story about this so good and moving that it can show that the Spotless Bride of Christ is greater than the sum of Her sinful parts, and can halt this exodus in its tracks." Movies can be that powerful. They can change hearts and minds by capturing the imagination and stirring the soul. Thanks be to God, that film has been made. Many people have seen it, but not enough. Many people have misunderstood it. Explain it to them. Many people have lauded it as a masterpiece without fully knowing why. This is why:

For a lovely and rich treatment of this movie, be sure to read this from Aleteia, "Calvary": A Hymn to Sacramental Life (in a Minor Key).

Here is an important article by Steven Greydanus, "Does the priest in 'Calvary' recommend mortal sin?"

Though this might not affect anyone else the way it did me, here is a song that I listened to ten times in a row while on an elliptical machine right before I started writing this. It helped me to digest the themes. I can try to explain how if pressed.

I could write much more. I would love to write a book and teach a class on this movie. I wanted to write about the dog, the cannibal, the cassock, the marriage, the water, the fire, on and on. Please do comment or email me if you want to keep discussing. I'm all fingertips.

Also, in case you missed it, Through a Glass Brightly was nominated for two Sheenazing Blogger Awards.
Posted by Kathryn at 7:37 PM