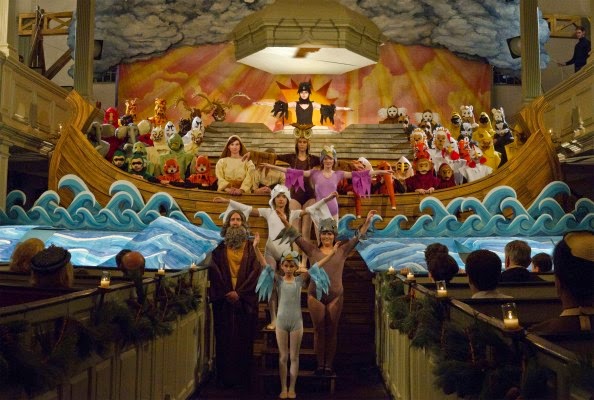 I did not see Noah when it was first released (mostly because of this and this). I waited until it came to the dollar theater. In short, I hated it and silently screamed, "This is the worst movie ever!" into my hair-entangled wringing hands over and over again. I was upset for two main reasons: 1) There were several very young children in the audience and many scenes in the movie are seriously disturbing (gratuitously so, even for adults), and 2) I've spent the last month thinking about the Flood story by repeatedly watching the excellent trailer on YouTube (which manages to tell a different story from the full movie), attending a performance of and subsequently listening to Benjamin Britten's opera Noye's Fludde, revisiting Wes Anderson's movie Moonrise Kingdom, and enjoying the delightful illustrations of Peter Spier's book, Noah's Ark. The edification and inspiration that I've drawn from all these was nowhere to be found in my experience of Darren Aronofsky's perverse concoction. What a shame to spend so much time, money, and talent on that.

I don't want to spend a whole post bemoaning the movie because I don't care to relive it all and because I don't have much time to blog these days. But I will say a few things to contrast it with the three good pieces of art mentioned above which are actually worthy of your liturgical imagination.

Wes Anderson is one of my favorite filmmakers. (Here is an interview which will give you a good idea of what he's like.) I love his childlikeness, his humor, his sensitivity, and his deep appreciation and understanding of the human condition. I think his 2012 creation, Moonrise Kingdom, is the best example of all these virtues. My former boss told me that he rereads all of Jane Austen's novels every year according to the season. Less impressively, I do the same thing with Wes Anderson's movies: Rushmore in the fall, The Royal Tenebaums in winter, etc. Along with The Life Aquatic, this is definitely a summertime movie:


On the fictitious island of New Penzance, Benjamin Britten's opera Noye Fludde is performed every year. In the midst of one summer's show, a young boy and girl meet, form a friendship, and plot to runaway together. The opera becomes the backdrop and narrative structure for the film. Sam and Suzy function as a recapitulation Noah and his wife as they take shelter in a Church during a major flood. They are also a new Adam and Eve who are in need of greater love than their earthly parents can give them. Themes of adoption, loyalty, forgiveness, hope, and perseverance permeate the film; and the flood effectively baptizes the main characters. It is a lot of fun, and the soundtrack, prominently featuring Britten's music, has been nonstop entertainment for my kids whenever we've been in the car for the last month.

"Sometimes the music comes first." Wes Anderson begins his preface to the soundtrack booklet with that statement. He goes on:


In the late fifties, Benjamin Britten created a sort of opera called "Noye's Fludde" which he intended to be performed by amateur groups in churches (with a few ringers thrown in, I think—the way the fancy ones sometimes do). The members of the chorus are the animals on Noah's ark. My friend Sanjay and I played a pair of otters, and my older brother sang as an elk. This was in 1979 at St. Francis Episcopal Day School, 345 Piney Point Road, Houston, Texas, 77024. I remember the full details and zip code because there was a poster contest each year for our school book fair, and that was the key information you had to get across. Anyway, I can more or less trace all the inspirations for MOONRISE KINGDOM to that address. The events are fictional—and most of the names have not been changed. 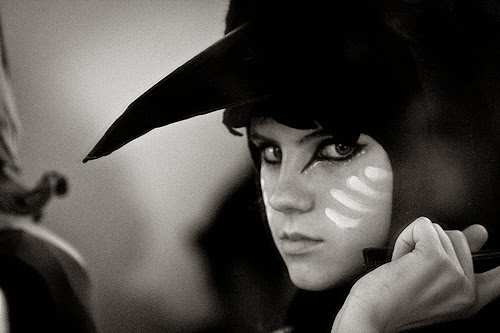 I love the way he was inspired. How fun it was to realize that the trumpet sounds in the opera must have been the basis for the Khaki Scout subplot. After already seeing Moonrise Kingdom four times, I finally had the chance to see Noye's Fludde live performed by a local children's choir and orchestra. That helped me appreciate Anderson's work much more, particularly the question that Sam asks Suzy, "What kind of bird are you?" The birds have different meanings, different identities. She is the raven—the black bird who flies away from the Ark and does not return. But the opera reassures us that she is not lost. Noye sings: "Ah, Lorde, wherever this raven be, Somewhere is drye, well I see." This helps us to understand her character more. She might not return with the olive branch as the dove does, but she is not drowned. Though she continues to have secret rendezvous with Sam, she has not left her home or her family in any permanent way. She may be a black sheep, but she is not a lost one.

Britten's opera is a musical setting of one of the Chester Miracle plays, Medieval allegories written in the fourteenth century by ordinary people. Britten chose to celebrate the role of the ordinary in his piece by having only a few virtuoso parts while the rest of the singing is done by children and by the audience all together. When I experienced the show live, I had a profound sense of the Ark as the Church, God's vessel carrying all of us towards the New Eden. It also reminded me of how much I love being a part of a production like that and how much I miss directing high school plays. I thought of a idea from the philosopher Alasdair MacIntyre who believes that it is very important for everyone participate in a theatrical performance at some point in his or her life. He knows the profound impact that it has for one to engage in such a practice—to enjoy planning, rehearsing, and performing with a group of people who each have a different role, be it backstage or out front. He believes this sort of activity builds character, builds community, and in so doing—little by little—saves culture. Participating in the live performance of Noye's Fludde with the cast made all of us part of the crew, the play's as well as the ship's.

If you'd like to see a somewhat grainy but very rich performance of the opera online, YouTube has the full show. My favorite part is when all of the animals board the Ark, singing "Kyrie Eleison":


Since my first son was born, I have become a major zoo-lover. His fascination with the animals—learning all of their names and observing their behaviors—has been very inspiring for me. I really do feel like a child again. All winter, while the zoo has been closed we have been listening to the wonderful musical suite, The Carnival of the Animals by Saint-Saëns. Now that summer is here, we visit the animals about three times per week and we try to focus our attention on just one or two of them each time. My kids and I meditate on the place in the universe of each species, aware that God deliberately and bizarrely willed each and every one of them. 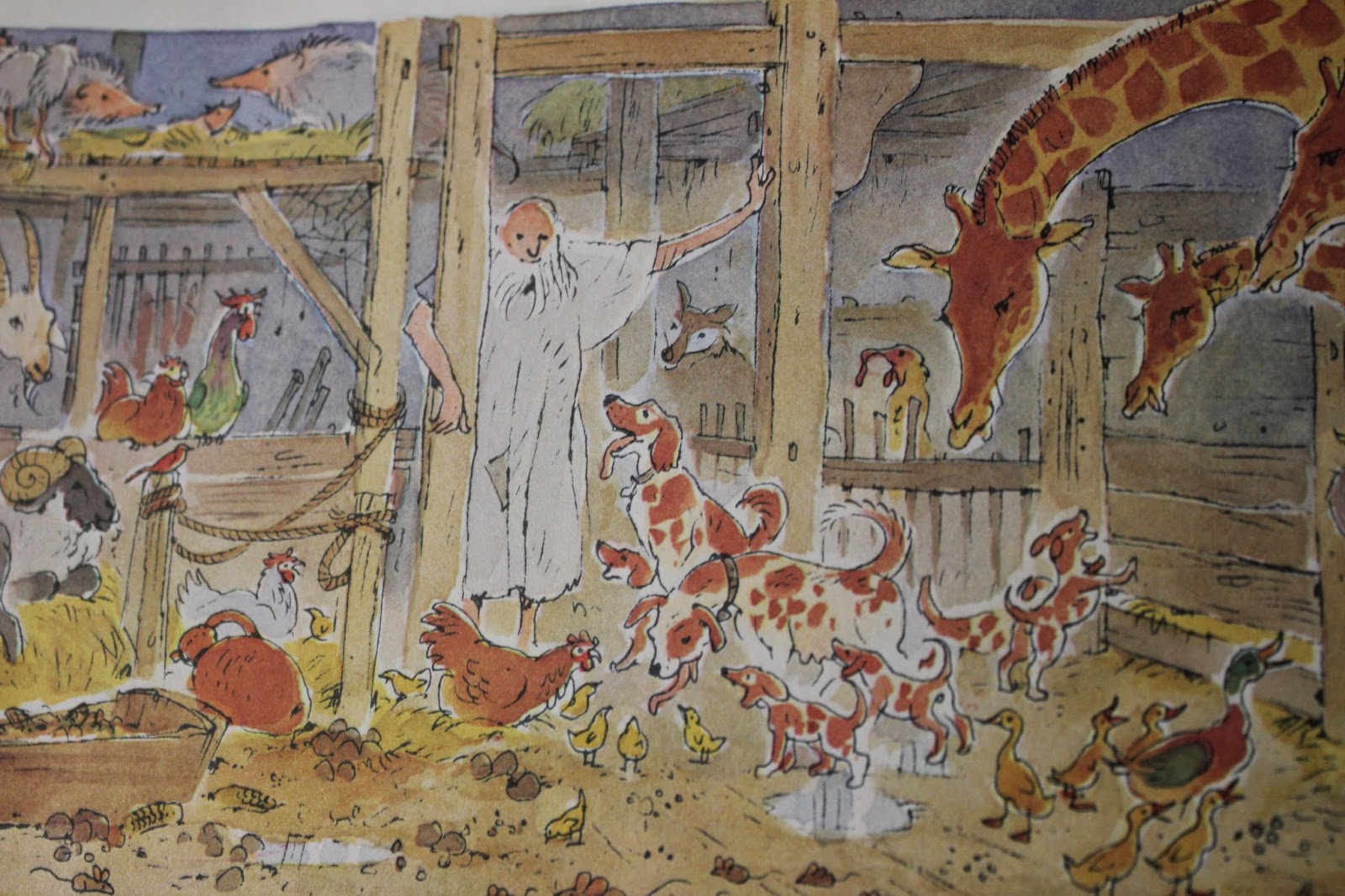 That leads me to Peter Spier's deliciously detailed book, Noah's Ark, which won a Caldecott medal in 1978 (the year before Wes Anderson was an otter in the play—perhaps it inspired a resurgence of Diluvian appreciation as I'm attempting to do here). There is almost no text in the whole book, just page after page of beautiful and careful illustrations. My favorite pages are the ones in the middle which show Noah lovingly watching the animals do what they do. He smiles as he rests against door frames, delighting in their innocence and uniqueness.

Oh, how I had hoped that the Noah movie would be more like this. It's not all smiles and pleasant musings on Spier's ark, mind you. We see Noah shoveling mounds and mounds of excrement, struggling with worry, knocking about as the huge ship pitches in storms. And the Flood itself is a troubling, difficult thing that is not glossed over. There's a page which shows the animals who were not needed beyond the designated pairs looking at the ark as the water rises around them. Parental guidance is needed.

Inside the ark, the animals are central to the story. The question, 'What would it be like to be inside a giant wooden boat with thousands of animals for forty days and forty nights' is very seriously and creatively considered. In the Aronofsky film, that issue is swiftly and cheaply handled: The animals are all drugged to sleep and are unconscious the whole time they're on the ship (to allow more focus on Noah losing his mind and plotting to murder his grandchildren. Sigh.). I fantasized about Maria Montessori coming back to life to direct the film-version of Spier's book. It would have been so thoughtful and so much more interesting. It would handle death and suffering responsibly while also inviting the viewer to imitate the virtues of the animals, especially their simplicity, their satisfaction with the present moment, and their sometimes surprising heroism. Imagine something like this as a scene in a movie about the Flood:


Noah might have been inspired to believe that the corrupt nature of mankind can indeed be transcended, just as these animal instincts were. When he imagines himself to be capable of cannibalism and decides that all of humanity (including his family) ought to be wiped out, he might have instead thought, "But for the grace of God, there go I." The Creator overcomes all sorts of things in the movie (barren wasteland instantly transformed into massive deciduous forest, for instance), why not the power to sustain Noah as a "righteous man, blameless in his generation" (Genesis 6:9)?

The Aronofsky movie is not based on or inspired by the Bible, pure and simple. But if you want something that is, by all means try Noye's Fludde for starters and then Moonrise Kingdom and Peter's Spier's book. Or, just watch the trailer for the Noah movie and let your imagination expand it into the thrilling, gorgeous epic that might have been and is still waiting to be created through your own artistic expression. Or have a look around at some of the other Chester Miracle/Mystery plays for inspiration. Wes Anderson concludes the preface to his soundtrack quoted above with a challenge: "Perhaps one of the recordings on this record will inspire someone among you to make a movie, as it did for me. If so, I will look forward to seeing it." And as C.S. Lewis said to his friend J.R.R. Tolkien one day as they considered the dearth of good art in the culture, "Tollers, there is too little of what we really like in stories. I'm afraid we shall have to write some ourselves."

Even if it means organizing a production of Noye's Fludde in your neighborhood or submitting a poem to a literary journal, do take up the torch, dear reader. Since this is the season for commencement addresses, I'll leave you with Neil Gaiman's memorable line from a few years back: Make good art.

There's an episode from season 6 of Mad Men titled, "The Flood" which does make reference to Noah's Ark. I haven't worked out all of my thoughts on it, but I'd be willing to if one of you would like to talk about it. I'm hoping that a full post about the series after next year's finale will be my blog's magnum opus. Stay tuned!
Posted by Kathryn at 10:09 PM 10 comments: