Twelve Hungry Men: The Disciples, the Death Penalty, and one Brilliant Play 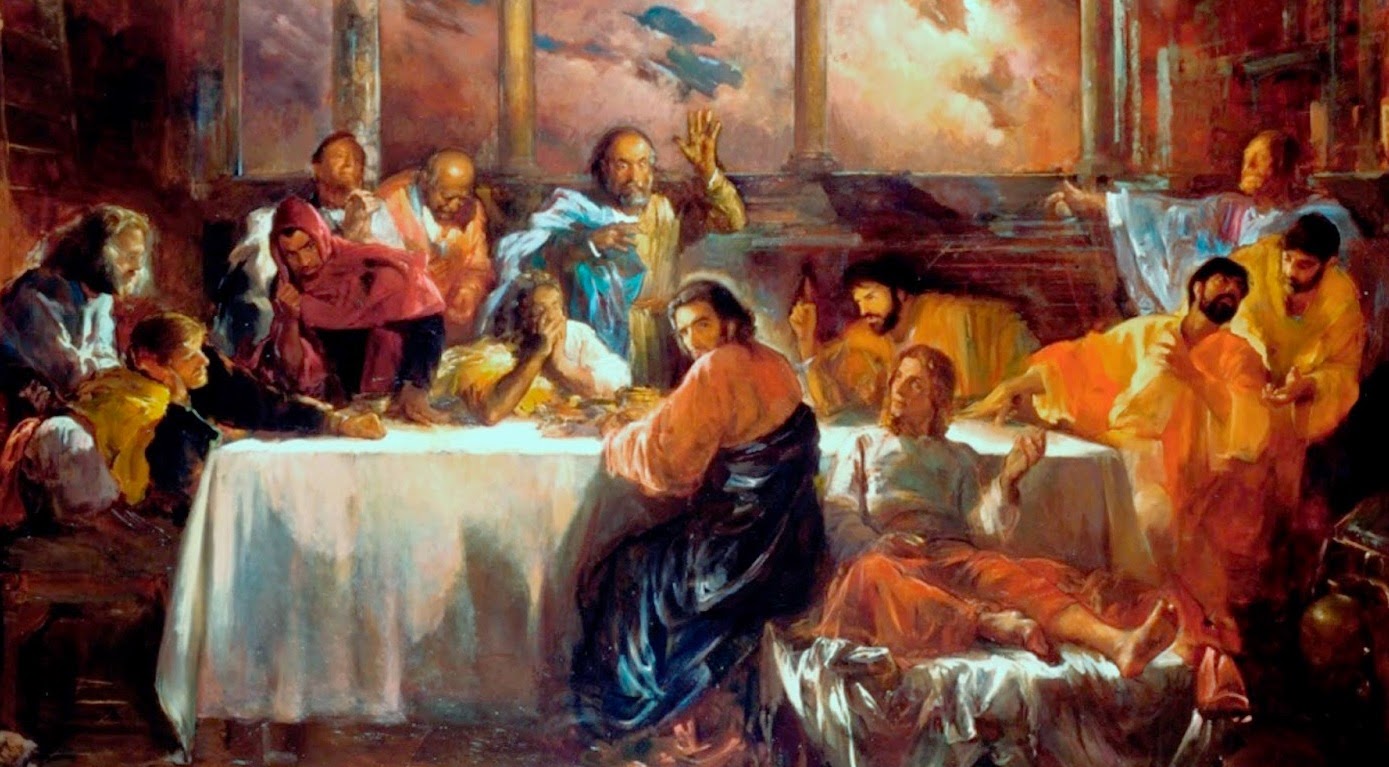 The Boston Bomber has been sentenced to death, adding more poignancy to this post which has been rattling around in my brain for months. A Facebook friend posted that link and added her own caption, "Killing is wrong. Unless you're the government."
***

I had a profound experience during the Holy Thursday liturgy this year. I was sitting quite close to the front when the washing of the feet took place. The atmosphere in the church was perfectly reverent and meditative, inviting me to carefully consider each man as he approached the humbled priest. I studied their faces, their clothes, their body language. Whoever chose the twelve this year is some kind of genius, because all of the men were so different from one another—distinct in age, looks, status, personality, temperament, etc., reminiscent of the compelling modern painting of the Last Supper (above) which was recently featured in the Magnificat. They really were like the twelve apostles, representing the twelve Tribes of Israel; yet these seemed to be the twelve social tribes of our little town.

Even though I only knew a few of them personally, I tried to map the disciples onto these men: "Which one is John the Beloved? OH. That one. Yes. What about Peter? Hmm..." A little while later, when habituation expected to hear bells at the Sanctus, I was startled by the sound of a loud thwack. Oh, that sound! It pierces me straight through every time. I remember when I first heard it at a Latin Mass in college. The whip-likeness struck me to the bone, and I suddenly knew Our Lord's Passion was close at hand. This time, I looked up and saw a crotalus of another kind. It was shaped exactly like a gavel, and I was reminded of another set of twelve men. 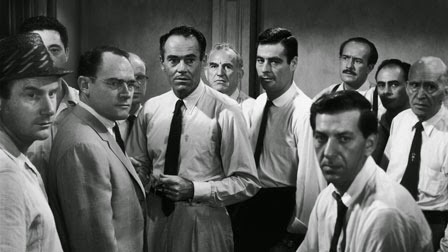 I must have been in ninth grade when I walked into the family room one evening to find my dad watching a black-and-white movie that was not It's a Wonderful Life. I stood there studying the screen in confusion, having accidentally imbibed the idea that old must be inferior to new. My dad said, "This is really good. You should watch it." Thankfully, I did. Now, I've seen Twelve Angry Men (1957, written by Reginald Rose and directed by Sidney Lumet) about a dozen times, and its rich lessons about human nature have made an indelible mark. Here's a brief synopsis: Following the closing arguments in a murder trial, the twelve members of the jury must deliberate, with a guilty verdict meaning death for the accused, an inner-city teen. As the men try to reach a unanimous decision while sequestered in a room, one juror (Henry Fonda) casts considerable doubt on elements of the case. Personal issues soon rise to the surface, and conflict threatens to derail the delicate process that will decide one boy's fate.

If you haven't seen it, do so immediately.

With that play-turned-film now scrolling in my head, I sat in the pew reflecting back on the washing of the feet thinking, "Which one is Henry Fonda? Is it the same as St. John? It should be since he's the closest to Christ and therefore the most merciful. Wait, who's Jesus? Oh! The convicted kid! Yes! YES! OH! Are there twelve jurors because there were twelve disciples? (Apparently, yes.) This is such an exciting Mass! I have to blog about this!"

So here we are.

Like the disciples, those twelve men represent all of humanity. (Here is a quick character sketch.) The one trait that they have in common is given to us in the title—angry. I find this really interesting. Yes, they're angry at the situation and, at times, one another. But after my careful study of the narrative, I think a more fitting descriptor would be hangry; for their anger stems from their hunger—hunger for righteousness, hunger for truth—though most of them scarcely sense that nagging, gnawing feeling within. Yet all at once, their appetites are made more acute by the compassion and courage of the one and only juror who sees the defendant as the child of God that he is—dignified and therefore worthy of a closer look.

My views on the death penalty were challenged by that film (What if there's a jury without a conscientious person on it? How many innocent people are executed because of weak character?); but about two years after I saw it, a very compelling research project in history class changed my mind completely. I chose as my topic the Lindbergh case—the kidnapping of aviation-hero Charles Lindbergh's toddler son and subsequent trial of Bruno Richard Hauptmann which newspaper writer H. L. Mencken called "the biggest story since the Resurrection." (What a claim!) I read several books on the "Crime of the Century" (like this), but one in particular convinced me, horrifyingly, that Hautpmann was innocent when he was sent to the electric chair.

I had never experienced such indignation, and I found myself ravenously hungry. I craved justice for the wrongfully accused and his poor, pleading widow. At that time, I was seriously considering film school, so it naturally occurred to me that this could be my first feature—a drama powerful enough to clear Hauptmann's name and expose the real culprit (you'll have to check out the book to see who I think it is). I saw myself as both Juror # 8 (Fonda)—asking everyone around me to reexamine the case, and film director (Lumet)—moved so deeply by Rose's play that he had to share it with an expansive audience. That idea which lingered in the back of my mind while I was writing my paper suddenly came screeching to the forefront when I found a picture of Hauptmann that looked strikingly like the actor I had just seen in the movie, Frequency. 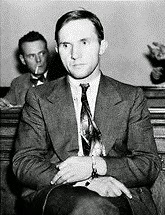 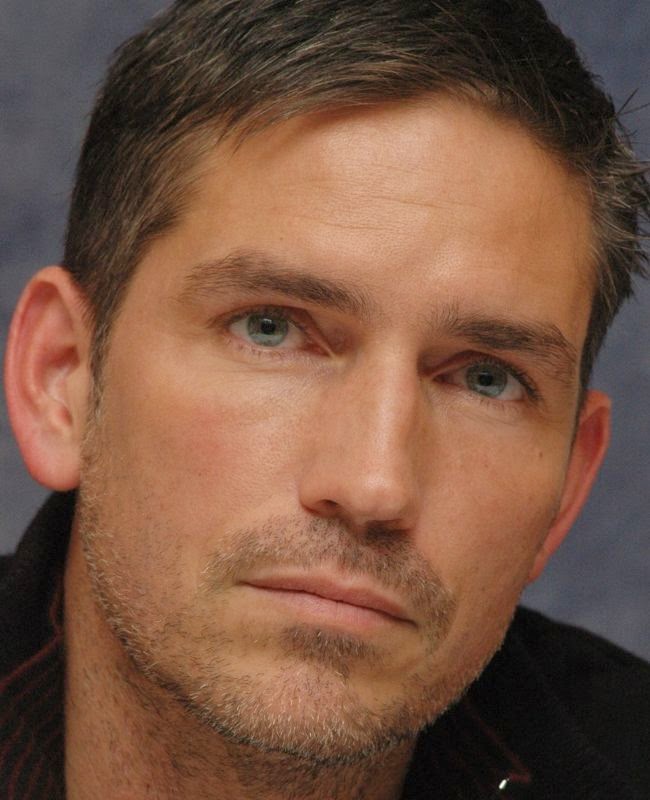 I screamed, ran to my car, drove to Borders, and bought three books about screenwriting. I tried my hand but did not get very far. Life got in the way. I did try to mail Jim Caviezel a copy of that one resource which contained all the elements of a shockingly good film. This blog post is an attempt to reclaim my forgotten zeal and reach the right people; for the crime of this century is that such a film has not yet been made.

In my mind, all of this is related to the disciples and the liturgical season in which we now find ourselves because that man on the right played Jesus and the Lindbergh kidnapping case might be, again, "the biggest story since the Resurrection." Also, the death penalty and the concerted Catholic effort against it appeared in the news quite a lot recently, and we ought to be part of the conversation. Here is a good article from the New York Times about the how the people of Boston feel about the decision to execute Dzhokhar Tsarnaev. That's a great starting point. And while we're talking about capital punishment in this country, we should also think about the ways in which we sentence the people around us to the "death penalty" of our own estimation. We think of those we dislike as unworthy of our care or even notice. We write them off—despair of them as if they were not children of God. But as a beautiful, simple line from C.S. Lewis humbly reminds us, "You have never talked to a mere mortal." When I first came across that line in The Weight of Glory, I became immediately convicted and unequivocally pro-life. I started taking everyone more seriously, more lovingly. How can we presume to know a man's soul? Who are we to take such matters out of the hands of the Author of Life? And how can we fail to value someone whom God deems worthy of existence? 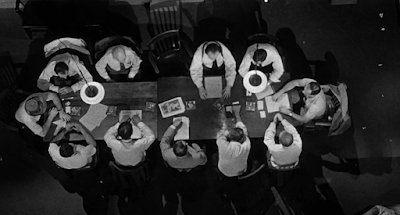 We must guard our hearts against the temptation to despise evil-doers, for "anyone who hates his brother is a murderer, and you know that no murderer has eternal life abiding in him" (1 John 3:15). Hatred inflicts the death penalty on ourselves. A story like Twelve Angry Men can affect this kind of change in us. I think it is ultimately against the death penalty in its message. One juror asks #8 (Fonda), "Suppose you talk us all out of this and the kid really did knife his father." That point is never addressed directly; but I think the overall message is that even if the boy is guilty, it doesn't mean he deserves to die. That jury room in the play/film functions like the Upper Room in the Gospels/Act. It is a place where mercy and grace convert hearts and minds. It teaches us to consider carefully the immortal beings in our midst—to afford others the benefit of the doubt because we have asked why and how until we have a fuller picture of the truth, and recognize Him who is Truth even in our enemies.

The disciples were taught this explicitly. Right after Christ washed their feet, he gave them this new commandment: "Love one another; even as I have loved you, that you also love one another. By this all men will know that you are my disciples, if you have love for one another" (John 13:34-35).  Just a little while after this, all but one failed miserably—they all voted "guilty" by what they did, and what they failed to do. Christ knew it would happen, and it is the reason that He stressed the importance of leaving them all again after the Resurrection. His Ascent to the Father would make way for the Descent of the Holy Spirit.

Liturgically, this is where we are right now. We await Pentecost, the time at which all of the lessons Christ taught in His earthly ministry will finally take flame in our souls. The power to love the unlovable—to allow for reasonable doubt and not condemn others to death—is a supernatural one. This Sunday, we are invited to put ourselves in the Upper Room where the disciples feasted on Christ's immortal flesh and where the Advocate will come to remind us of all that He said—all the facts of the case, the details of the trial. We must bring our hunger with us to the table, and allow ourselves to be filled up with grace. And then, we will be sent out into the world—just like the twelve jurors to their twelve corners, converted by their encounter with mercy and true justice—ready to set the world ablaze. 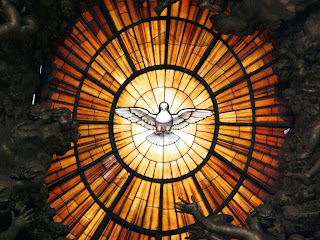 Come Holy Spirit, fill the hearts of your faithful and kindle in them the fire of your love. Send forth your Spirit and they shall be created. And You shall renew the face of the earth.

O, God, who by the light of the Holy Spirit, did instruct the hearts of the faithful, grant that by the same Holy Spirit we may be truly wise and ever enjoy His consolations, Through Christ Our Lord, Amen.

This meditation is meant to pave the way for my next post, "How Mad Men Made Me a Better Christian." I'm still processing the finale, but I will start writing soon.

Also, check out this amazing quote which resonates deeply with my point here.