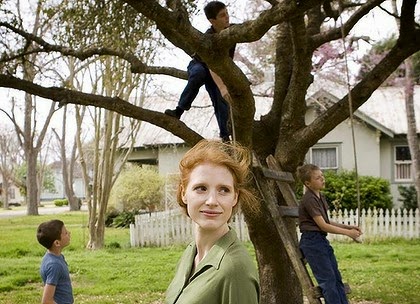 If you've been following my blog for a while, you'll notice that I like to write about things when they are relevant to the culture and/or the calendar. It's a way of living liturgically that I've long enjoyed. I've wanted to write about my favorite movie of all time, The Tree of Life, since it first graced me with its existence three years ago. My mom joked that I should write about it on Arbor Day, so here we are.

I saw the trailer for Terrence Malick's masterpiece in the early spring of 2011. It had been one year since I had left my exciting job at a high-profile university in order to stay home full time with my firstborn son. As any mom who has made that choice knows, sometimes home-life can start to feel rather monotonous and tiresome. In the midst of an emotional slump made worse by lingering cold air and gray skies, I happened upon this preview and was reminded of an exchange between George Bernard Shaw and G.K. Chesterton which was quoted by Dale Alquist at a speaking event. I don't remember it exactly, but the gist is that Shaw said that life at home is "as dull as dishwater." In his usual fashion, Chesterton had a quick reply: "Ahh... but have you ever looked at dishwater under a microscope? It's teeming with quiet fun!" Watch this (linked in case the video below doesn't work on your device) and you'll get it:

It was a very important moment for me. All of the spirituality of S. Thérèse of Lisieux and St. Josemaría Escrivá that had long been so attractive suddenly became much more poignant and visceral. The "little way" of "ordinary holiness" relies on one's paradigm becoming a childlike one which sees with the eyes of humility, wonder, and joy. The trailer illustrates this idea. Fortunately, I had studied the song that plays along with the images, "The Moldau" by Bedřich Smetana, and wrote an essay about it in college. (I can't seem to find it now but it was something like this.) So I already knew that the song was a poem about a river which functions as a metaphor about the various milestones that we hit as we flow through our lives. Hearing this powerful and beautiful song while seeing ordinary moments of play and discovery in childhood moved me beyond words. I looked forward to the release of the movie with about as much anticipation as people looking ahead to graduation, a wedding, childbirth, retirement, and even death. I knew I would be a better me on the other side. Unfortunately, our little town's theaters don't usually get fancy Palme d'Or-winning films. So I wrote a letter to the director of the university's performing arts center pleading that it be shown there. Thanks be to God, they did it.

The date of the one and only showing coincided with a time in which my husband and I felt called to welcome another child in our little family of three. Pondering that in my heart when we went to the theater, I can't tell you the levels of happiness, awe, and sublimity that I enjoyed. I wept the entire time. I focused on the theme of motherhood especially, thinking about my two-year-old and how at last we were giving him a sibling. My husband and I went home and talked about the movie for four straight hours (this is my idea of ultimate fun, by the way). I was more moved than I had even hoped I would be. 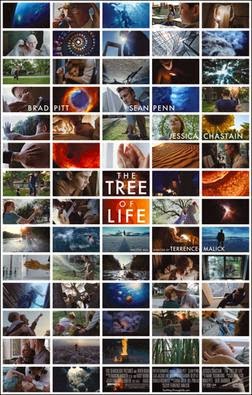 For four long and nauseous months, I played the Moldau for my son who loved the song immediately. He requested it multiple times per day. We would dance and twirl (Jessica Chastain-style) in the living room blaring it loudly. It helped overcome the crippling fatigue that overshadowed that fall. Then, as I eased into my second trimester, I suddenly felt a thousand times better and I enjoyed the reassuring little flutters of the child within me. But that only lasted a single day. I went to my doctor for a routine heartbeat-check and he heard no thump but my own increasingly panicking pulse. An ultrasound confirmed that our baby was dead. The next few days are a blur of anguish. It was the week before Christmas. I was induced and after eleven hours of labor, my husband and I held our second child in the palms of our hands.

I was very anxious to see my family afterwards, to find a way to comfort them since words failed us over the phone. We drove across the country the day after Christmas and the best way that I could imagine sharing in "the appalling strangeness of the mercy of God" (Graham Greene) with my loved ones was to show them The Tree of Life. Together, we beheld the majesty of this glorious film, and this time I focused on the theme of death. Like the mother in the film, I had lost my second child. If you haven't seen it, the movie is a meditation on suffering framed by a quote from the Book of Job 38: 4,7:

Where were you when I laid the foundations of the Earth?…When the morning stars sang together and all the sons of God shouted for joy?

My dear friend who is the godmother of my firstborn son uses the film to teach her students about suffering in the Christian tradition. It is absolutely perfect for that. It juxtaposes the macrocosm of the universe from the beginning of time with the microcosm of a family in Waco, TX in the 1950s. It celebrates the human drama that has been repeated throughout the ages. It reminds us that "there is nothing new under the sun" (Ecclesiastes 1:9). It tells the story of a son being reborn through the memory of his mother's faith. It explores fear and shame and forgiveness and love with spectacular imagery and tremendous music. It reawakens the viewer to the sacredness of the present moment and the innocence of youth that must be regained if we are to enter the kingdom of heaven. It was originally 24-hours long and was painfully difficult for Malick to cut, for in many ways it is the story of his own life. Now that I've seen Chartres Cathedral with my own eyes and been to a Mumford & Sons concert with my beloved brother, meeting Terrence Malick in person is at the very top of my bucket list. 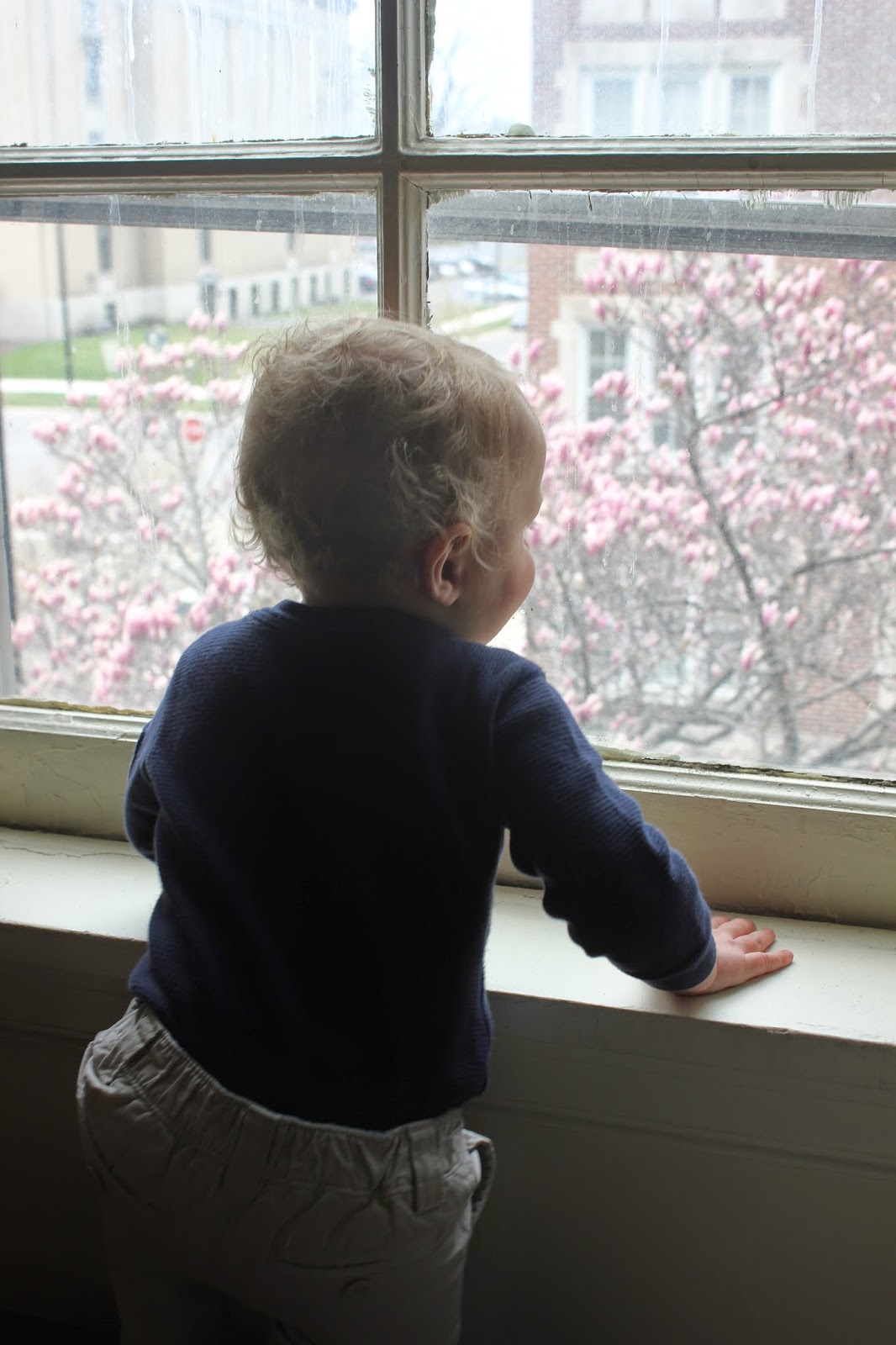 I saw the film once again very recently. A friend of mine was preparing a talk about the Augustinian elements in the film and he wanted audience feedback to be part of his research. Thanks to that, the experience of it is very fresh in my mind, heart, and soul as I enter into yet another major milestone in my life, another narrative playing out along the banks of the Moldau: my husband has been offered his first job as a professor and we are moving away from the place where we became a family. The end of the film (when the family moves) has all new relevance. Each day, I look around and appreciate the things about this apartment and this town that I will dearly miss, especially now that it's spring. A central image in the movie is that of a very large tree in the backyard of the family's house. The camera returns to it time and time again to represent their lives as well as the life of the world. I, too, have a special tree that blooms every year at this time, usually within the Easter Octave as it has this year. It has always been the most beautiful feature of our apartment building, and we've taken family photos in front of it for years. After the miscarriage, we had another son who is now a year-and-a-half. He is lightning in a bottle. It's amazing to think that if the second child had not died, he would not exist. We visit the grave of our child (which is under the most lovely tree in the whole grove) with him from time to time, and I always hear the Moldau in my head as I contemplate the mysteries of this life. I return home to the beautiful tree, which we can see through our many windows.

To tie a bow on this post, I have a happy piece of news to share. In a familiar way, God has given us a sweet sign of His Providence. We have made an offer on a house in our future hometown. It is on a street named after trees. Today is the day that the owners told us that they would respond, and it happens to be Arbor Day. That's enough for me to know that it's ours, and that God is so very good indeed. When I first saw a photo of the house, I felt the familiar warm rush of joy flow through my heart, for it boasts a beautiful tree. This is why I haven't posted in a while. House-hunting is a mighty time-consuming affair, as you may well know. But thankfully, it has not been an anxious one. I've had the peace of knowing that right house would be made clear, and it certainly has.

This Arbor Day (or whenever you read this), go hug a tree (*wink*) and imagine that it represents your whole life—roots, rings, blooms and all; and be sure to give thanks to your Maker whom you will one day meet.

***
If anyone would like to ask or just talk more about the content or meaning of The Tree of Life, I'd be plenty happy to do so in the comments or via email. Treat yourself and your family this Easter season by buying it here! I hope you won't turn it off when the dinosaurs show up...
Posted by Kathryn at 2:53 PM 16 comments: