"We're Ancestors": Some Thoughts for the Holidays (Part 2, "The Royal Tenenbaums") 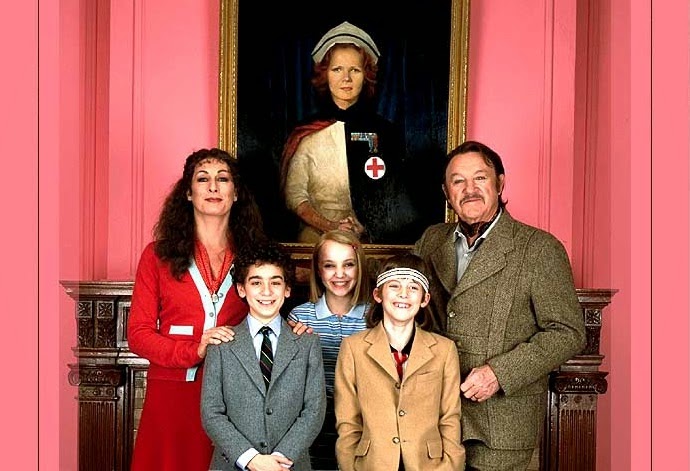 This post is the second of two, beginning with this one. My aim in sharing these thoughts now is to bolster up you readers for the family fray that likely awaits you this season. Cheers!

The Royal Tenenbaums is an acquired taste. I saw it in the theater in high school and I walked out thinking, "Wow—that was so weird." But then I bought the soundtrack, listened to it for several months straight, and then saw it again on DVD. This time, since the music was by then interwoven with my own life amidst my family, the movie was far more affecting. I was able to relate to the characters thanks to a little Mark Mothersbaugh bonding. Try this at home.

Now that I have seen it ten times and given a talk about it, I love it. The extreme attention to detail rewards repeated viewing handsomely. Though the setting and the characters are very particular, the themes are remarkably general. This is about family; and like most of Wes Andersons' movies, it's about broken people finding themselves and becoming more whole through their families—a highly laudable theme in times like these. That's why I call him the Chestertonian artist of our age, and I'll revisit a few quotes from my last post to align them with The Royal Tenenbaums.

Of course the family is a good institution because it is uncongenial. It is wholesome precisely because it contains so many divergencies and varieties. It is, as the sentimentalists say, like a little kingdom, and, like most other little kingdoms, is generally in a state of something resembling anarchy.

A little kingdom is the perfect way of describing the Tenenbaum homestead. The house looks like a castle, complete with turrets and even flags. And the master of the house is named Royal. The family members within the walls of this kingdom are just as Chesterton said: in a state of anarchy. The king is no good. He is self-satisfying, unfaithful, rude, unjust, and callous. He abandons his little princes and princess while they are still very young. But twenty-two years later, he finds himself broke—financially, yes; but the metaphor represents his soul. He sets about repairing the damage he caused his wife and children through the action of the story. When we find each wayward adult-child, we might expect that each is far better off on his or her own—far away from the broken home. But instead, we see that all three are cripplingly depressed. They are homesick for each other and their mother, and heartsick for repentance from their father.

Once reunited under the same roof, the Tenenbaum family undergoes a rock tumbling like you've never seen—"scrappin', yellin', mixin' it up." Being so malformed himself, Royal struggles (often hilariously) to reconnect with each of his children. At first, he tries to reach them through the only means he knows—lying and cheating. He tells his wife and children that he only has six weeks to live, and that is why they allow him back into their lives. He lays out his plan to them, saying that he wants to "make up for lost time." He wants to visit his mother's grave with them, talk deeply about personal troubles, take his grandsons out on little adventures. None of this goes smoothly, because life really doesn't. Smoothness is earned through grit and water working hard together over time. Royal even uses this word "grit" to describe Etheline, his wife. It might seem an unlikely word for her—so patient and selfless and put-together. But those virtues can only endure if they are tough. They are tried and proved true. She's who I want to be for Christmas.

One detail of Etheline's character that probably goes unnoticed by most has to do with Royal's gravestone. Early in the movie, when Royal takes his children to visit their grandmother's resting place and that of Chas's wife, he spots a very grand tomb which reads, "Veteran of Two Wars / Father of Nine Children / Drowned in the Caspian Sea." He considers it thoughtfully, then says, "Hell of a damn grave. Wish it were mine." Later on, while he's still pretending to be dying, he tells Etheline that he has prepared the epitaph for his own grave: "Proof-read it for me before they carve it on the headstone, ok?" She smiles and agrees. At the very end of the movie, after all of the pain of turmoil caused by the revelation of his lie and the subsequent last-ditch effort to make amends, we are in that same cemetery with the whole Tenenbaum family. They are attending Royal's funeral. The priest walks over to the headstone and reads it, puzzled:

The music chimes in and the family walks out of the plot in slow-motion. Anderson uses this technique to make his audience pause and consider the poignancy of the moment. He's inviting us to consider the proof-read epitaph, and with both depth and levity at the same time, we realize that Royal did rescue his family from such wreckage—wreckage caused by himself. We're reminded of his question posed to Margo at the ice cream parlor: "Can't someone be a s--- their whole life and repair the damage? I mean, I think people want to hear that!" He's right. People do want to hear that, because we're all guilty of it from time to time and we all need the forgiveness of our loved ones. That's what makes this movie so great. This kind of movie—so quirky and dark at times—could have easily ended otherwise. It could have stayed dark, could have been despairing like so many other movies about dysfunctional families. But Wes Anderson really understands mankind in a profound and childlike way; and he really believes in repentance, forgiveness, reconciliation.

Anderson provides an emblem of Royal's character arc in the figure of Pagoda, the Indian butler (or valet...hat tip to Jeeves) who assists in the hoax. Royal explains to his grandsons that Pagoda saved his life after he was knifed in a bazaar in Calcutta: "He carried me to the hospital on his back." They ask who stabbed him, and he replies, "He did. Yeah, there was a price on my head and he was the hired assassin. Stuck me right in the gut with a shiv." Later in the movie, we see the same scene replay. Once Royal and Pagoda have been exposed as frauds and are thrown out of the house, Pagoda opens up a knife and stabs Royal in the gut, screaming, "You sonofabitch!" Immediately, Pagoda catches Royal as he falls and helps him over to a cab. Royal yells at him, "That's the last time you stick a knife in me, you hear me?!" They go to the YMCA and Pagoda tenderly cleans and dresses the wound. A cycle that takes Royal's entire life to complete happens within a matter of seconds here. It's a very Andersonian device—odd, funny, subtle, moving. While we're already working on being more like Etheline, maybe we can strive to be like Pagoda, too—repairing the damage the instant that it is made. Try this out next time you hastily stab one of your family members with an offensive remark or a contemptuous eye roll. The sooner the better, as the Tenenbaums would attest.

One final thought about a line from the movie's trailer that I mentioned in the companion post: "Family isn't a word. It's a sentence." I think this is supposed to be a snarky comment by a film marketer whose point probably has little or nothing to do with Wes Anderson's intended message. But I think it can be redeemed. What is a jail sentence for, after all? It is intended to reform a criminal—smooth him or her over by way of work, suffering, and time. Think about the rock tumbler again. And think of every sports analogy for achieving holiness—"no pain, no gain." We all need to be mortified in this way because we're all sinners. We all have Royal blood, in that sense. Love can save us from ourselves, and the first person we should love is the one who is right there, sitting next to us at the dinner table. You're ancestors, remember. I'll give Chesterton the last word:

Here are some interesting and fun bonus links related to this post.

- The 10 Most Affecting Wes Anderson Moments

- The 42 Most Hilarious Gravestones of All Time