Soichin' for Sumthin': Billy Joel's Dip in the River 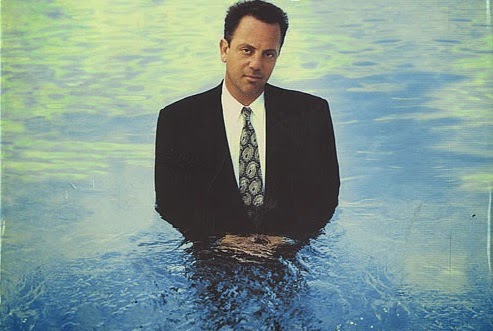 I took off two months from blogging in order to move. Now I'm back at it with a post that I did not see coming. I have a list of topics that I can hardly wait to tackle, but the surprise ideas are really fun, too. Billy Joel's 1993 hit "The River of Dreams" came out 21 years ago today and the artist's current US tour just wrapped up. So the time is right. Let us go down to the river together.

The first time I ever listened to Billy Joel on purpose was last week. I was a little kid when he was really popular and my parents were decidedly not fans, preferring instead the likes of Tom Petty and Dire Straits. Thus, my only brushes with Joel were in high school when my boyfriend memorized "We Didn't Start the Fire" and summertime in college after every single shift at P.F. Chang's when my drive home inexplicably coincided with "Piano Man" being played on the radio. (I still smell soy sauce whenever I hear that song.)

But I accidentally quoted him to a friend which inspired her to send me this audio clip (included below) in which Joel describes the inspiration behind "The River of Dreams." Full disclosure: I don't love this song and I mostly think about The Lion King as I listen to it. Yet this monologue is perfect fodder for my blog (the relevant part starts at 3:09):


This is my favorite kind of thing. God comes to us even when we're not looking for Him and sprinkles the seeds of "good infection," as C.S. Lewis called it. Billy Joel was raised in a non-practicing Jewish family and occasionally attended Catholic Mass with his friends when he was a kid. At the age of 11, he was baptized in a Church of Christ (Hat tip to Wikipedia). Bingo. What's the "something sacred I lost"? There it is—baptismal grace. He says repeatedly in the lyrics and in interviews about the song that he doesn't know what it is, but it's clear that he has a deeply felt sense of it. And it's even more clear that the sacred thing is to be found in the visuals that haunt his imagination: they are Biblical, and they are specifically Baptismal.

Joel knows that he is preoccupied with something beyond him, beyond his comprehension. I think that is what fuels his desire to add a chant preface to the song. He says he wrote a lyric about a man who has lost his faith and wanted to translate it into Latin. He knows that Latin has a special place in religious worship. But because it is not something that he himself practices, he calls this impulse "pretentious." He's reaching out and up to something beyond, and then loses heart at the thought that it is not for him. He's not that kind of guy. He doesn't want to pose as if he is. He doesn't want to be ridiculed by those that know him. So he drops it.

I noticed the same thing going on with him in this video from his 1993 Saturday Night Live appearance. While singing "River of Dreams," he pronounces the lyric comically: "I was soichin' for somethin'," as if to say, I'm not taking this too seriously—"God knows I'm not a spiritual man," and all that. His body language throughout the video betrays the same attitude. Also, he avoids most of the high notes from the original recording as if he's slightly embarrassed of them. But, as if to compensate for this timidity, he shows off his musical cred by playing a few very challenging classical pieces between practice takes. He is the Piano Man, after all.

Similarly, in the interview clip, he says that he did not want to write a song with three chords. It's been done to death and again he is worried about his image—about being original. Again I think of Lewis:

Even in literature and art, no man who bothers about originality will ever be original: whereas if you simply try to tell the truth (without caring twopence how often it has been told before) you will, nine times out of ten, become original without ever having noticed it (Mere Christianity). 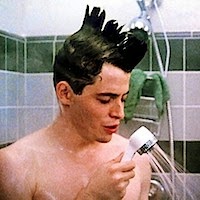 Happily, Billy Joel's apprehension is defeated by truth. This idea really came to him. He really had a dream that showed him these things and inspired these words. He must tell that story. I love that an experience in real water—singing in the shower—contributes so much to the development of the song. The shower seems to function as a figment of the very thing that he has lost and has been searching for. It mortifies his self-consciousness in order to let the truth of the experience shine through him. He even uses the language of death to describe it. As he was lathering up and listening to the echo, he overcame his embarrassment over the triteness of the three-chord progression and pretentiousness of a non-spiritual man writing a spiritual song: "I was a dead duck." In another interview, he says, "I was toast." The song transcended him. It made itself known. It was a good song with a very good message. Ultimately, its goodness came from God. "All that is good comes from God" (James 1:17). As Joel puts it, "I got religion in the shower! I don't know what happened!"

And so, in spite of the artist himself, "River of Dreams" came to be. He says, "I didn't know why I was writing the things I was writing. But if you're a writer and you get an idea, hey—go with it, you know?" What a great way to describe Divine inspiration. The word "get" even implies a giver. His prefession of atheism seems a little rocky at this point. At the end of the audio clip, Joel says,

It was this spiritual... thing. And I mean those things happen all the time. I know they happen with artists. Artists can kinda tune into that sometimes, even though we don't know we're tuning into it we're there. We have our hands in something and we don't know what it is. But there's an awful lot of spirituality to it.

Isn't this awesome? Here is Billy Joel struggling to articulate Tolkien's much more developed idea of the artist as "subcreator." When I learned that model Christy Brinkley—"ex number two at the time"—painted the artwork for the album, I wondered if there might be more glimmers of God shining through the artist... 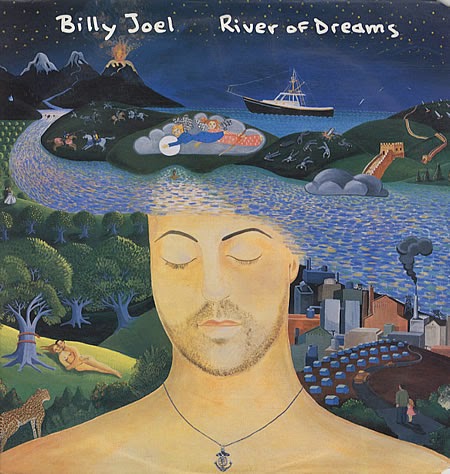 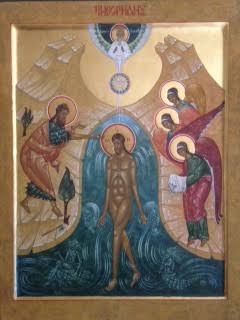 As Joel rightly says, "A river is a religious icon." (This one happens to be from my family's own Little Oratory.)  But did Brinkley deliberately render her husband's "stream of consciousness" as a religious icon? That's what it looks like! But again, at least according to this interview that she gave, the artist does not fully grasp what she was inspired to create. Consider the similarities between these two images. First of all, Billy Joel's shoulders and head fit the shape of the Jordan River. Next, the trees and mountains are basically in the same place. John the Baptist seems to be mirrored by the leopard. Angels attend nearby and the placement of the bright orb (the moon?) is very near the placement of the Holy Spirit, both streaming light upon the subject. The colors are all very similar, yet somewhat inverted. Finally—and I may be going too far here—do you see how much the facial features of Billy Joel resemble the torso of Christ?? Whoa! God seems to be calling very loudly to these two, "Get thee to a baptistry!" Or, at least in the case of Billy Joel or someone else who has already been baptized, get thee to a confessional in order to enjoy the Sacrament of baptismal renewal. It is there that Joel, Brinkley, and all of us can find and have restored the "sumthin' sacred" we've lost: the state of grace.

The last stanza of the song begins:


I'm not sure about a life after this / God knows I've never been a spiritual man
Baptized by the fire, I wade into the river / That runs to the promised land 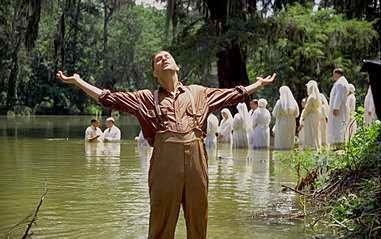 One Christ-haunted night, Billy Joel waded in. Will he follow the river where it runs? Will he continue to dip into these cleansing waters in one way or another for however many years he has left to live? He says in the middle of the song, "I hope it doesn't take the rest of my life / Until I find what it is that I've been looking for." Let us meet him in that hope by praying for this wayfaring artist. Our prayers can move mountains, perhaps the very "mountains of faith" that Joel saw in his dream. And while we're praying for him, we can reach out to those friends and family members of ours who love his music and share the audio clip. Let us cry out in the wilderness the immortal words of Delmar from O Brother, Where Art Thou?, "Come on in, boys. The water is fine."

One final comment: Though it does not appear in the official lyrics, Billy Joel always sings the word "Gloria" on top of the music as the song fades out. This is an homage to an old doo-wop song; but I like to think that it is also Joel's way of squeezing in a bit of that "pretentious" Ambrosian chant after all. I see you winking, Piano Man.

If you liked this post, I recommend two earlier ones that I wrote about music (Arcade Fire, Mumford & Sons) which rely heavily on an excellent lecture, "Three Chords and the Desire for Truth: Rock 'n' Roll and the Search for the Infinite." I also have this post which is similarly about Baptismal themes in music. Finally, this video from Harvard Sailing Team humorously illustrates how hard it is to talk about music. As always, I'd love to hear from you!
Posted by Kathryn at 8:21 AM