*Charles Dickens' Christmas classic was published 170 years ago either yesterday or tomorrow—the date seems to be disputed, so I thought I'd split the difference and publish my post in honor of him today.

I cannot recall a time when I didn't know the story of A Christmas Carol. The images and themes have delighted or haunted me since my childhood, either in the form of the "Dickens Village" adventure at the mall or the hundredth or so viewing of the Muppet version. (Michael Caine, you will always be my Scrooge.) So when I studied Dante's Commedia in college, it was no leap for me to recognize the countless similarities between the two stories. I would write C.C. in the margin every time I came across another bit of Dickens in Dante. At long last, I can pitch some these ideas to the wider world.

There's no known proof that Dickens was familiar with The Divine Comedy; but there is one historical fact that I recently found which may point to a direct link. Since I knew that my dear G.K. Chesterton had tremendous admiration and affection for Charles Dickens, I thought I ought to finally read some of his essays on the subject. His own "Introduction" (1922) to A Christmas Carol along with "Dickens and Christmas" (1906) are very interesting and filled with little witticisms and paradoxes that cheered me right up (after looking at the above faces). The bit that most intrigued me is Chesterton's claim that Dickens actually wrote his Carol while he was touring Italy. I imagine that although Dickens may not have actually read an English translation of the Comedy he quite possibly encountered the story or at least the spirit of the story in the art and culture that surrounded him as he wrote. Chesterton describes what it must have been like for Dickens to explore in such a foreign land, suggesting that his mind never left England behind for a moment. Thus, he never really understood the roots of the Italian experience: "the Roman legend, the ancient life of the Mediterranean, the world-old civilisation of the vine and olive, the mystery of the immutable Church." However, as Chesterton points out, Dickens seems to have intuited some of these things nonetheless:


Dickens had in his buffoonery and bravery the spirit of the Middle Ages. He was much more medieval in his attacks on medievalism than they were in their defenses of it. [...] He could only see all that was bad in medievalism. But he fought for all that was good in it. And he was all the more really in sympathy with the old strength and simplicity because he only knew that it was good and did not know that it was old.

It is this spirit that permeates A Christmas Carol. It acts like a Medieval morality play because it is one. Here I will juxtapose the Carol and the Comedy in order to illustrate some of these ideas.

First of all, both main characters begin in a dark wood—vividly illustrated as such in the Comedy and similarly rendered in chimney tops, alleyways, and dense fog in the Carol. The Pilgrim and the Miser have lost their way. Hence, they are taken on a mystical journey for the sake of their reclamation: Dante through Hell, Purgatory, & Heaven; Scrooge through the Past, Present, and Future. The three beasts that Dante meets before his journey begins (leopard, lion, and wolf) function similarly to the omens that Scrooge encounters on Christmas Eve: the hearse, the transformed door-knocker, the ringing bell. And when Dante first meets Virgil, the lines run,


And when I saw him standing in this wasteland,
"Have pity on my soul," I cried to him,
"whichever you are, shade or living man!"
"No longer living man, though once I was," [...]


"But you must journey down another road,"
he answered, when he saw me lost in tears,
"if ever you hope to leave this wilderness; [...]"

Likewise (though in the third person), Marley's visit to Scrooge goes, 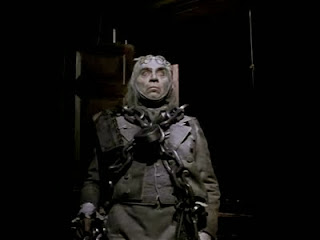 Marley describes his own condition, the ponderous chain that he wears—a perfect contrapasso (a term used to describe a punishment that illustrates the consequences of an evil deed, which is the organizing principle of the Comedy) for the sins of his life. He then explains his mission, and says to Scrooge that without the visits of the three ghosts, "you cannot hope to shun the path I tread." Virgil's writings taught Dante; Marley was Scrooge's partner; and both have been divinely sent to help the men whom they influenced so deeply so that these may not suffer the same fate as themselves—to end up in the outer darkness.

At this point, if you are familiar with both stories, I invite you to think about how closely the plots run alongside one another. I won't go into a ton of detail here, mostly because my memories of the Comedy have sadly faded too much to be immediately recalled. (Sigh.) But consider such similarities as the roles of Beatrice and Belle (and maybe Fan) or Forese and Fred. Or think of the scene in the Carol when the Ghost of Christmas Present reveals from beneath his robes the two children, Ignorance and Want:


They were a boy and a girl. Yellow, meager, ragged, scowling, wolfish; but prostrate, too, in their humility. Where graceful youth should have filled their features out, and touched them with its freshest tints, a stale and shriveled hand, like that of age, had pinched, and twisted them, and pulled them into shreds. Where angels might have sat enthroned, devils lurked, and glared out menacing. No change, no degradation, no perversion of humanity, in any grade, through all the mysteries of wonderful creation, has monsters half so horrible and dread.

This sounds like it is straight out of the Inferno in every way. Both Dante and Scrooge undergo a horrifically scathing examination of conscience as they observe all that their guides have to show them.

Though it would be satisfying to a slightly OCD person like myself to have tight parallelism between the three realms of space in the Comedy and the three realms of time in the Carol, the fact is that the latter basically ends where only the second canticle does, in Purgatory. As Dante nears the top of the mountain (Canto XXX), he at last encounters his beloved Beatrice who at first does not speak comfort but rather reprimands him for having wasted his God-given talents and wandering from the path that leads to Truth. Her stern face and words excoriate the Pilgrim. She calls his name—the first time that he hears his own name during his journey—and leads him to the waters of a stream where he looks down as he is filled with shame upon seeing his reflection. He says, "tears and sighs were frozen hard in me," but as the angels sing a song of pity his icy heart thaws, allowing cleansing waters to pour forth from his eyes. Beatrice reveals that her purpose is to move the Pilgrim to "perceive the truth and match his guilt with grief." Doesn't this scene fit so closely with the one where Scrooge is in the graveyard with the Ghost of Christmas Yet to Come? Instead of his own reflection, he sees his name and wishes that he could sponge out the writing on the stone. The haunting visage is sort of an anti-Beatrice in some ways—hideous, dark, faceless, silent—but just as firm and filled with the same motive: to move our hero to accept who he is and what he has done and from there to repent. Scrooge, like Dante, weeps heartily for his sins and the fate that they have earned him. 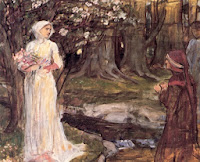 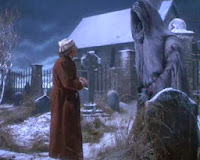 In the Comedy, Dante faints and then awakens to a new level of peace and joy. Scrooge likewise suddenly wakes to find that it is Christmas Day and he is a changed man: "I am as light as a feather, I am as happy as an angel, I am as merry as a schoolboy." Oh, how this moment fills my heart with joy every year. But for Dante, the story does not end here, for there is so much yet to come for him—an entire canticle, the Paradiso, in which he will encounter the multitudes of saints and finally God Himself in the Beatific Vision. But it's important to remember that the Comedy is an Easter story while the Carol is a Christmas one. Scrooge even says:

And here we are in the season of Advent, becoming more childlike in order to properly welcome the baby who came to save the world. To draw out the contrast between this time and that of the Easter cycle, Chesterton said of Dickens:


And (as I have said) as were his unconscious relations to our European past, so were his unconscious relations to England. He imagined himself to be, if anything, a sort of cosmopolitan; at any rate to be a champion of the charms and merits of continental lands against the arrogance of our island. But he was in truth very much more a champion of the old and genuine England against that comparatively cosmopolitan England which we have all lived to see. And here again the supreme example is Christmas. Christmas is, as I have said, one of numberless old European feasts of which the essence is the combination of religion with merry-making. But among those feasts it is also especially and distinctively English in the style of its merry-making and even in the style of its religion. For the character of Christmas (as distinct, for instance, from the continental Easter) lies chiefly in two things; first on the terrestrial side the note of comfort rather than the note of brightness; and on the spiritual side, Christian charity rather than Christian ecstasy.

That last line is the main difference between these two stories. As Chesterton suggested, Dickens didn't understand the fuller sense of the Mystical Church as Dante did—as the spotless Bride of Christ (beautiful as Beatrice) whose purpose is to lead each human being to union with God. The Comedy is headed for brightness, aiming at ecstasy—much like the natural world does as it blossoms into spring at Easter. But the Carol turns in from the cold, burrows into warm hearth and good wine and loud laughter. It does not ponder the universal church so much as it celebrates the domestic one. It is about comfort and joy—or perhaps more correctly joy in comfort, like the babe tightly and lovingly swaddled in the manger. To every thing there is a season. This is a time to be born.

I highly recommend that you watch your favorite film version of A Christmas Carol with your family or a friend sometime in the coming weeks. (Sure, Scrooged counts, but the Muppet one is seriously the best.) Let it remind you of all of these things; because the fact is, we all end up in a dark wood or a freezing graveyard with the sins of every day. We, too, should live in the past, present, and future to stay aware of our weakness, repent of our sins, and so be purged of them by the merciful God who loves us. And we need never do any of this alone, for we have His spirits—the angels and saints—to be our guides along the way. 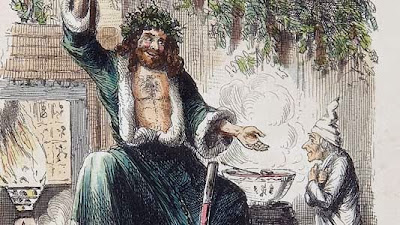