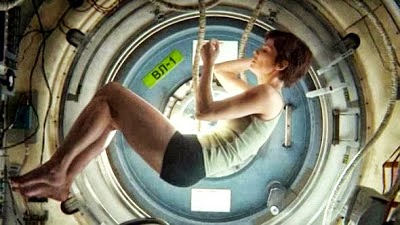 * My Mumford & Sons/Arcade Fire post will have to wait because I must write this now, spoilers and all.

Maybe it's because I was profoundly moved by the story of Gianna Jessen a few years ago. Maybe it's because I read "Angel in the Waters" to my son a thousand times when I was pregnant with his brother last year. Maybe it's because I untangled a Terrence Malick movie a few days ago. Maybe it's because I just talked to my mother who is praying outside an abortion clinic every single day this month. But apparently, I saw a different movie last night than everyone else. I thought that Gravity, a film starring Sandra Bullock and George Clooney that is being hailed as a cinematic masterpiece—was about a failed abortion. Then I went home and did some Googling and found that no one else has seen it this way. Well, I've never let that stop me before, so here we go.

Before I saw this movie, a friend told me that it is "very pro-life" and that I would "get it." I expected that it would deal with end of life issues so I was prepared for a meditation on euthanasia. But as soon as I saw Dr. Ryan Stone (Bullock) curl up in the fetal position and go to sleep, I realized that we were inside a womb. Then I considered that every pregnancy magazine, 3-D ultrasound photo, and "inside the womb" YouTube video I have ever seen looked remarkably like this movie: the swimming motion, the umbilical cords everywhere, the parachute as a placenta...more and more keep occurring to me as I write this. Some reviewers have pointed out some of these elements, and the filmmaker himself, Alfonso Cuarón, says that the film is about rebirth and evolution. But why all this distress in the womb, the safest place on earth?

Then, as I saw all that debris flying at the characters, I thought it looked like a spray of saline. And Matt Kowalski (Clooney) being pulled away from Dr. Stone seemed caught in a vacuum hose. And all of the huge pointed objects hurling at them were like the other tools used to procure abortions. I remembered my mom telling me about the film "Silent Scream" as I thought about the opening text of Gravity which tells us that there is no sound in space. Even Bullock's character's name, Stone, might as well be Clump Of Cells. Her first name, Ryan, is ambiguously gendered, just as we're usually not sure of the baby's sex until he or she is born. Piecing this together, outer space has become the inner sanctum of a woman who wishes to terminate her pregnancy, thus rendering the environment inhospitable. This realization gave new weight to the other piece of opening text, "Life in space is impossible."

Let me pause to make something clear: I'm not claiming that the filmmaker had all of this in mind, consciously anyway. One of the main points of this blog is that it gives me a place to work out the idea that our human aesthetic and moral sensitivities, when poured out sincerely in art, often echo God because we are made in his image and likeness. I think there are other ways of reading the movie—some of which seem quite complementary—and I hope moviegoers will take with them what they already have and leave with something more. Also, I'm not claiming that this is an exact allegory, so not all of the elements have to fit into the vision perfectly. I just see enough evidence to make a substantial claim. That said, let's keep going.

Think about the moment when Dr. Stone says she is worried that no one will pray for her soul. This is of course a deeply moving statement within the context of the film, but with this subtext we can imagine it as a cry of the unborn. She also says that she has no one on Earth looking up at her, and that she has never prayed because she has never been taught. It is almost as if she has never lived in the outside world at all. Seen in this way, the film works like a thought experiment for those people who choose not to see the fetus as a human being. What if the unwanted life inside were a fully formed adult? What if we could see her? What if she were beautiful and talented—an Oscar-winner, even? Think of the potential of that human life. One year at the March for Life in Washington, I held a sign that read "Equal Rights for Unborn Women" with a picture of the female symbol ♀ with another one (only tiny) floating inside the circle. This movie underscores all of the posters and prayers offered up by the marching masses each January.

Matt Kowalski became the guardian angel for the baby inside the womb. (If you haven't seen and read this book, I highly recommend it.) Matt is clearly some kind of supernatural or paranormal entity the last time that we see him. As Ryan loses oxygen and is dying, he comes to the rescue—to light, to guard, to rule, and to guide, as the prayer says. He tells her about the world on the other side, just like the angel in the book. But the difference is that she may choose whether to die or go on struggling to survive. This reminds me of C.S. Lewis in Mere Christianity when he talks about the crisis of birth:


Until we rise and follow Christ we are still parts of Nature, still in the womb of our great mother. Her pregnancy has been long and painful and anxious, but it has reached its climax. The great moment has come. Everything is ready. The Doctor has arrived. Will the birth "go off all right"? But of course it differs from an ordinary birth in one important respect. In an ordinary birth the baby has not much choice: here it has. I wonder what an ordinary baby would do if it had the choice. It might prefer to stay in the dark and warmth and safety of the womb. For of course it would think the womb meant safety. That would be just where it was wrong; for if it stays there it will die.

Dr. Stone chooses to live. She is then born, and thus reborn. As her pod enters the Earth's atmosphere it looks like a head moving into the birth canal. The scene of reentry made me weep heavily with both memory and anticipation. I recalled vividly the moment when my son was crowning—the ring of fire, it is so aptly called by we mothers who've experience natural child birth. Ryan says, "Houston, I'm either gong to make down in one piece, or I'm gonna burn up in 10 minutes; either way, no harm no foul." Not the best bit of dialogue ever but it did remind me of how I felt pushing out a 9 pound baby: "I might die right now." She's screaming, I'm screaming (into my scarf), babies everywhere being born right now screaming—what a shocking and terrible and bizarre way we come into the world. And then, suddenly, the plunge into the water. I didn't think I could take any more obstacles at that point, but birth is that way, too. Will the baby be able to breath on its own? Will the cord be wrapped around its neck? Will the heart rate plummet or skyrocket? Then, at last, she surfaces and takes in that precious oxygen. I half-expected a giant bulb syringe to appear and clear away the mucous as she coughs and sputters. Then, with the weakness of a newborn, she drags herself onto the shore. She grips the earth and releases it like Mary in The Passion delivering her Son into His Father's Kingdom. She presses her forehead to the ground, and whispers, "Thank you," like all of the thousands of unwanted babies who are unintentionally and despite all odds born alive.

The film runs 91 minutes, like 9 months plus 1 year as we get to witness not only the birth but the first breath, first pushup, first crawl and first step. I had the privilege of attending it with a dear friend who is five-months pregnant. There just a foot away from me was the real thing teeming within. A 3-D ultrasound could have shown us just how that baby reacted to all of those loud noises, just as the 3-D photography heightened our own experience of the movie. What an age we live in.

It's worth pointing out that this director also made the film, Children of Men, which also features a profound commentary on pregnancy and hope. The director of photography for that film and this one also made The Tree of Life, a soul-stirring beauty-fest on all levels. May God grant that these people come into the fullness of faith, and along with them, many from the viewing audience.

If you'd like a few more essays with religious interpretations of this movie, you might enjoy this from Patheos, this from Barbara Nicolosi (who first got me excited to see this movie), and this from Fr. Barron.

What do you think? Can you fit any of the other scenes or images from the film into this framework? Feel free to argue with me if you think I'm dead wrong or crazy. That's what I'm here for.